My family’s bucket list of visiting the seven wonders of the world has been completed (thanks to my Dad)!

We departed from San Francisco for Jordan on Christmas Day to visit Petra. Overall, the trip was simply amazing. The Middle East is filled with so much history and culture, which in my opinion, is 100% worth experiencing. Given all that is going around in the world these days, it’s too easy to grow prejudice or to fear the unknown based on what we see in the news. Truth is, Jordanians (and IMO, all people in the region) and Americans have similar goals and enemies (i.e., ISIS, Al Qaeda, etc), and ultimately want stability and peace throughout the world. The US State Department issued a warning against Westerners visiting Jordan due to the deadly ISIS attack in Karak, giving us a sense of uncertainty before our travels. This was quickly overcome when we landed, upon seeing heavily armed police/guards every quarter mile. I wanted to get a couple pictures of them, but found out that this is strictly prohibited without their consent. I approached a couple officers, but was quickly turned around when they saw my Nikon (I was careful to slowly open my camera bag, and explained what I was doing).

Hotels also provided a sense of security, by requiring all bags to go through an X-Ray machine, and people through metal detectors.

The government seemed to go long ways to provide security for tourists.  This is essential for Jordan, as tourism is their main economic sector. Having an unemployment rate of 30%, senseless acts of violence really puts the nation under economic pressure.

Our first and last days were in the city of Amman. We stayed at the InterContinental hotel on Islamic College Street. As we pulled into the hotel, we were immediately welcomed with warm service (as well as a heavily armed police officer who happened to be stationed in front of the hotel). After checking in, our bags were ushered off into our rooms. Since it was pretty late (11PM), we ended up eating dinner at the hotel. Breakfast the next day was amazing. Looking at the placards by each item, I realized that pork was not served. After breakfast and checkout, our venture to Petra commenced.

On route to Petra

We stopped by a couple churches on the way to Petra. Visiting Mount Nebo was very memorable. The high altitude provided a panoramic view of desert’s arid and mountainous terrain. Due to the attack on Karak the week before, our tour guide recommended we stop at Montreal, which is a Crusader Castle, situated in the quite little town of Shobak. The temperature was freezing in the low 30s (I’m from California!). We even saw patches of snow on the drive, which threw me off completely. Shobak was our last stop before reaching Petra at around 4:30PM. With the sun setting, we spent the rest of the evening in the hotel, the Mövenpick. 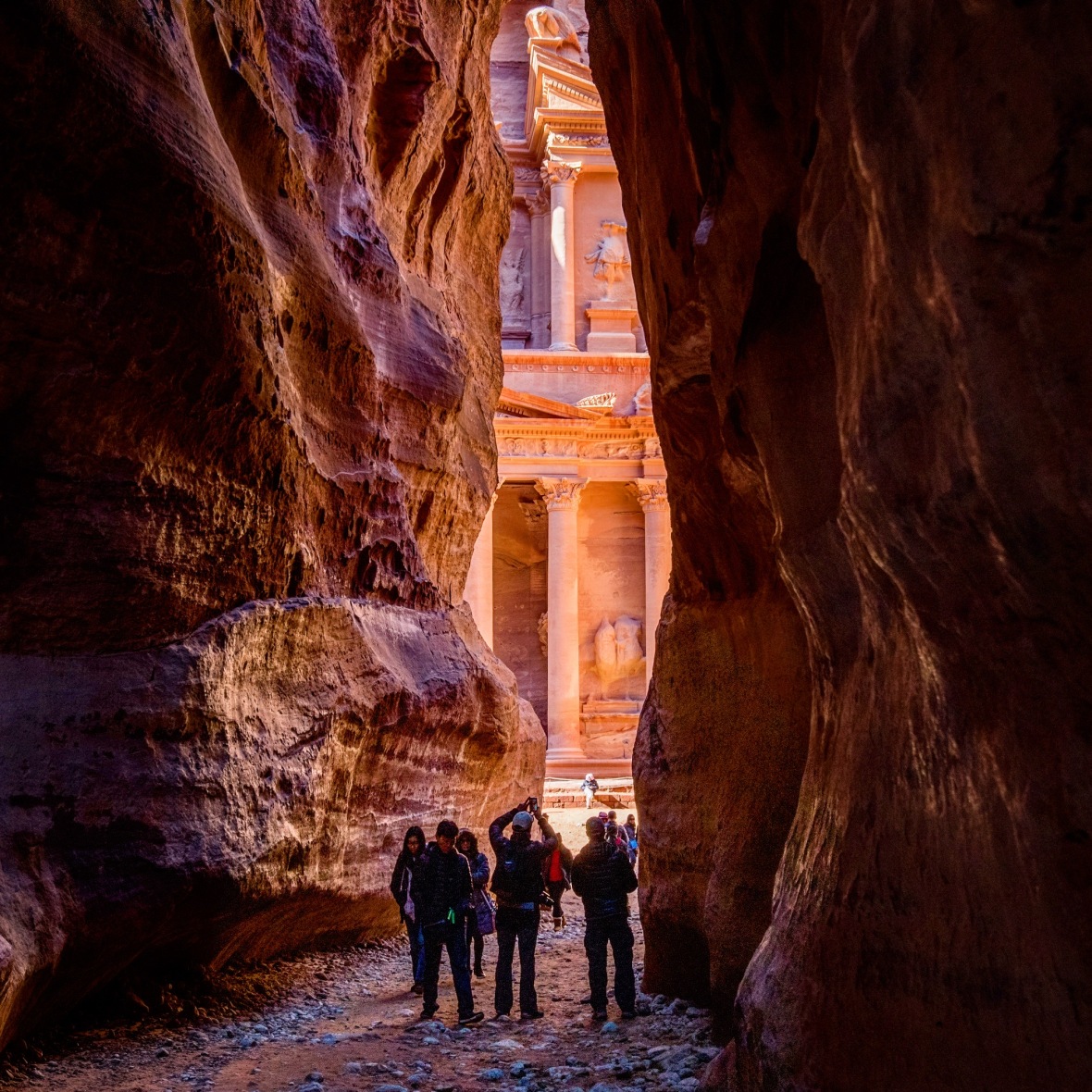 After a decent (nothing spectacular) breakfast at the Mövenpick, we met up with our tour guide, and walked to the Petra entrance. The entrance was a cool 3 minute walk from the hotel lobby. After taking a map as if we were at Disneyland, we continued to walk towards a stable, as our tour included a mini 500 meter horse ride. Once we were kicked off of the horses, we continued to walk further into the ancient city. The naturally formed valleys (from earthquakes), and carefully planned infrastructure (roads, water pipes, etc) truly warranted Petra’s candidacy for being a Wonder of the World. We eventually came up on the Treasury. The sun was perfectly shinning on the ancient temple, making for wonderful pictures. We then rode camels for about a mile, until we faced off with some mountainous terrain. Time to switch rides, and hop on some mules! The guide, Mohammad with the Gold Tooth (he gave himself the nickname, not me) helped us up on our respective mules. The mule ride was kind of intimidating. I watched helplessly as the animal navigated us up over 700 steps, through valleys with no rails, carefully planning each step before taking it. Once we were at the top, we were staring at Ad-Deir. Words cannot describe how enormous this ancient temple is. After taking some pictures, and doing a little more hiking, we continued our mule ride for another 4 miles, and ended up back at the hotel. Sleep could not have come sooner, as we rested out tired bodies from hikes and riding various animals. The next day started fairly early, as our driver advised us to leave at 8AM sharp. After the same mediocre breakfast at the Mövenpick, we stated for a 2 hour drive to Wadi Rum. Upon understanding that the land was owned by the natives (similar to Native American land), it quickly made sense why there were multiple checkpoints just outside the gates of the Wadi Rum Visitor Center. We met up Mohammed, our Wadi Rum Jeep tour guide. I decided to hang out on the flat bed of the pickup, as Mohammed took us to various hot spots in the desert. After returning back from the 2 hour desert tour, we continued our way back up North, to a four hour drive to the Dead Sea. 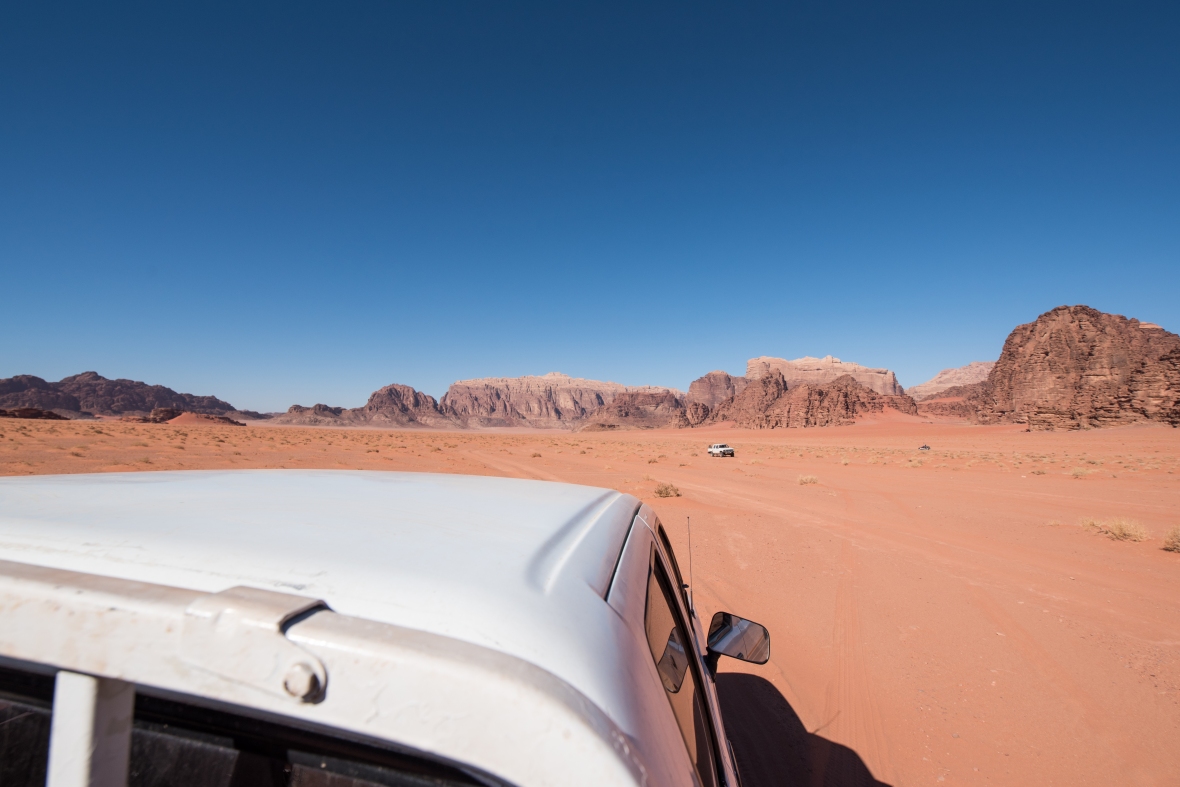 Driving down the Dead Sea Highway, my ears immediately notified me of the sudden drops in altitude. I downloaded an altitude (by GPS) app, and noticed we quickly went from +2,000ft to -1,500 ft towards the hotel. The Kempinski Resort was the epitome of a 5 star resort. From its gorgeous pools (three to be exact) and attached bars, to the largest Spa in the Middle East, it felt as if we drove into Sandals. 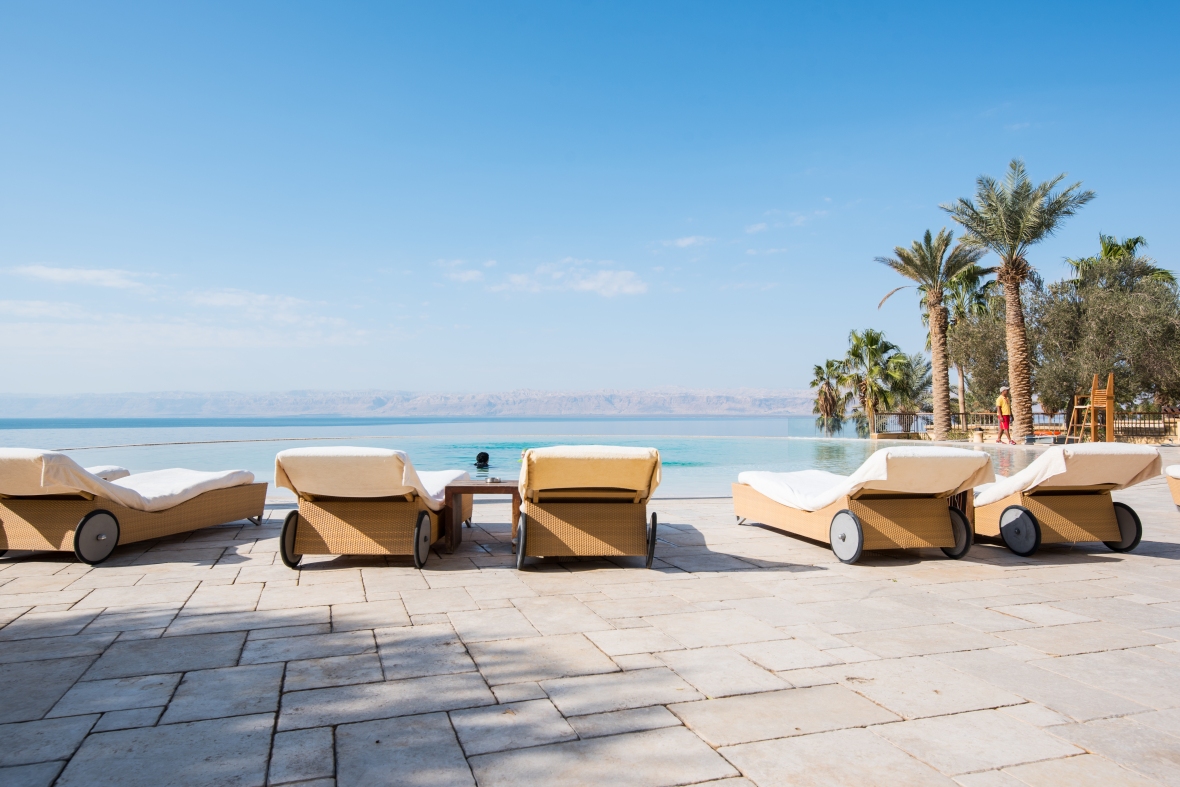 It had a completely different vibe than the rest of the country. After watching a couple sunsets and spending New Years Eve, it was time to leave back to Amman for a City Tour, and our return back to San Francisco.

The drive back to eastern Amman was about 45 minutes from the Dead Sea. The driver took us to a Dead Sea mud product store, where we were able buy some purified Dead Sea products for much cheaper than at Kempinski’s. From there we drove to the Citadel and got a tour of the site. As most places were closed due to it being Jan 1st, we walked to the Roman theater, just to poke our heads in and take some pictures. We started noticing a build up of local youth, and realized they started to show interest towards my DSLR. This made us feel a little uneasy for the first time in over 8 days, and so we left after spending about 20 minutes or so. By this time, the sun was setting, and we head back down south for the Queen Alia airport, about 1.5 hours from East Amman.

Just like other trips, I enjoy traveling as it helps me understand other cultures for the first hand. Jordan is a very close ally for the United States, and I did not any point feel threatened or scared. The amount of security available in the streets instilled a sense of certainty, for both myself (as a tourist) and the tour guide (as a local) alike. I am looking forward to more trips down to the Middle East!